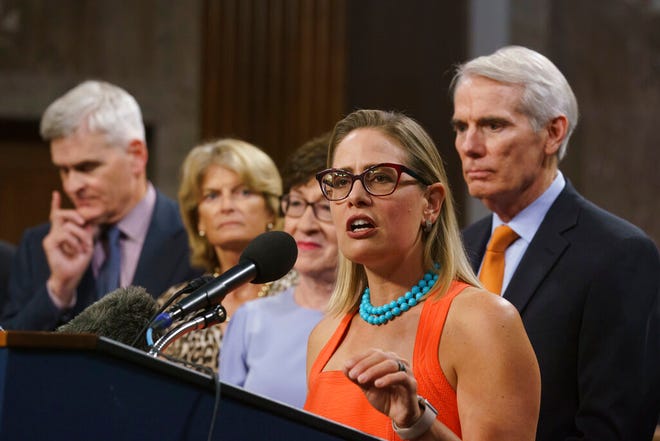 U.S. Sen. Kyrsten Sinema fired back at liberal Democrats in the House of Representatives Saturday, saying it was “inexcusable, and deeply disappointing for communities” across the nation that the fate of the $1.2 trillion infrastructure bill is linked to their $3.5 trillion human safety net measure.

The left-wing of the party held up the bipartisan infrastructure deal Sinema, D-Ariz., helped broker. Their resistance came after Sinema and Sen. Joe Manchin, D- W.Va., separately made clear they did not support the sprawling, unfinished House bill.

“The failure of the U.S. House to hold a vote on the Infrastructure Investment and Jobs Act is inexcusable, and deeply disappointing for communities across our country,” she said in a lengthy statement Saturday. “Denying Americans millions of good-paying jobs, safer roads, cleaner water, more reliable electricity, and better broadband only hurts everyday families.

The apparent impasse has for the moment bottled up both bills. President Joe Biden spoke with House Democrats on Friday, and participants left the meeting sounding optimistic a deal to pass some version of the House bill along with the Senate-passed measure was still possible.

For now, Sinema’s infrastructure deal is in limbo after progressives in the House continued to tie passage of her bill to passage of a House bill sketching out $3.5 trillion in “human infrastructure” and climate change mitigation.

Sinema had been largely silent on the matter until Saturday.

She said Americans expect lawmakers to weigh legislation on its merits “rather than obstruct new jobs and critical infrastructure investments for no substantive reason.”

Through this process, she said, other politicians have engaged in “an ineffective stunt to gain leverage” for a separate proposal.

“My vote belongs to Arizona, and I do not trade my vote for political favors — I vote based only on what is best for my state and the country,” she said.  "I have never, and would never, agree to any bargain that would hold one piece of legislation hostage to another.”

Sinema said that she continued bipartisan infrastructure negotiations in the Senate over the summer at Biden's request. That package passed 69-30 in the Senate in August and would help reshape the nation’s roads, water systems, bridges, transit systems, and access to broadband.

“My commitment to delivering lasting results is also why I have engaged for months in direct, good-faith negotiations over the separate budget reconciliation proposal,” she said.

“Good-faith negotiations, however, require trust. Over the course of this year, Democratic leaders have made conflicting promises that could not all be kept — and have, at times, pretended that differences of opinion within our party did not exist, even when those disagreements were repeatedly made clear directly and publicly.

“Canceling the infrastructure vote further erodes that trust. More importantly, it betrays the trust the American people have placed in their elected leaders and denies our country crucial investments to expand economic opportunities.”

With no votes scheduled in the Senate on Friday, Sinema returned to Phoenix. She continued negotiations with the White House on the human infrastructure measure and went to a medical appointment. She was scheduled to attend a fundraiser for her political action committee on Saturday.

The drama over both proposals are laying bare the divisions within the Democratic Party and are testing the political limits of Biden’s policy agenda. The president went to Capitol Hill on Friday to try to quell the infighting between the moderate wing — which wanted an immediate vote on the physical infrastructure bill — and progressives.

“Things only happen here when there is urgency,” Rep. Pramila Jayapal, D-Wash., who is the chairwoman of the Congressional Progressive Caucus, said on Friday. “I’m just so proud of our caucus, because they are standing up for people who feel like they have not been heard in this country for a very long time.”

Dozens of Democrats in the House were unwilling to further scale back a $3.5 trillion plan that would, among other things, fund universal pre-kindergarten, take new steps to mitigate climate change and raise taxes on the wealthy.

There were more than enough Democratic holdouts to defeat a vote on Sinema’s bipartisan bill, forcing House Speaker Nancy Pelosi, D-Calif., to delay a vote she had promised.

In the Senate, Sinema and Manchin separately made clear they could not support the $3.5 trillion proposed legislation from the House.

Democrats need every member of their party to pass the bill using a special provision known as reconciliation.

Manchin told reporters he could not approve any measure topping $1.5 trillion. It was the first time he publicly identified his financial bottom line.

Sinema said Thursday she had similarly made clear to Senate Majority Leader Chuck Schumer, D-N.Y., in August that there were components of the House bill she would not support.

Answering to House progressives who accused Sinema of failing to articulate a vision and top-line dollar amount for the package, her spokesman John LaBombard said she communicated her views to White House negotiators and Schumer weeks ago.

“In August, she shared detailed concerns and priorities, including dollar figures, directly with Senate Majority Leader Schumer and the White House,” he said. “Like our bipartisan infrastructure bill, the proposed budget reconciliation package reflects a proposal of President Biden’s — and President Biden and his team, along with Senator Schumer and his team, are fully aware of Sen. Sinema’s priorities, concerns, and ideas.”

The canceled vote doesn’t necessarily torpedo Sinema’s bill, but the lingering insistence on tying it to the bigger bill suggests Democrats may have reached a fiscal impasse within their own party.

Another critical government deadline is looming: Both chambers need to raise the government’s debt ceiling.

Treasury Secretary Janet Yellen has said the government should be able to continue meeting all its financial obligations until Oct. 18.

The technical provision on paying the debt could trigger a global financial crisis if the U.S. defaulted on its obligations.